Usually I really like brussels sprouts with a sweet and salty hint, but these are more of a salty and tart combo, it’s complex! Sophisticated right?

Also, two things I realized this week that I hadn’t remembered: Joey Fatone is in My Big Fat Greek Wedding and that Butter Pecan is a way underrated ice cream flavor. Random side note aside, let’s explore these greenies.

Brussels Sprouts with Kimchi and Bacon, adapted from the New York Times

Turn on the oven to 400 degrees. I sliced up about 3 pieces of turkey bacon and fried them in a little bit of oil (due to their lack of a lot of fat they have been burning in the saute pan).

While chopping up the bacon, I sliced off the brussels sprouts’ “butts” and sliced them in half. The timing works out peeps, don’t be in a rush.

Ok, bacon’s cooked! Take it out with a slotted spoon and then add in your brussels sprouts. Add some oil to the pan if these guys are a little bit dry and sprinkle with salt and pepper. Let them get a little golden browny in the pan then transfer to the oven. Here’s where I differ from the New York Times. I let them turn green and roast for around 15 minutes but I wanted them a little crispier, so I set the oven rack on the top rung and turned up the heat to broil for a minute or two. But if you don’t want them super crispy, I think 12-15 minutes is enough time.

While these are cooking, go ahead and puree your kimchi. Put it in a bowl and set aside for when the brussels sprouts are ready. 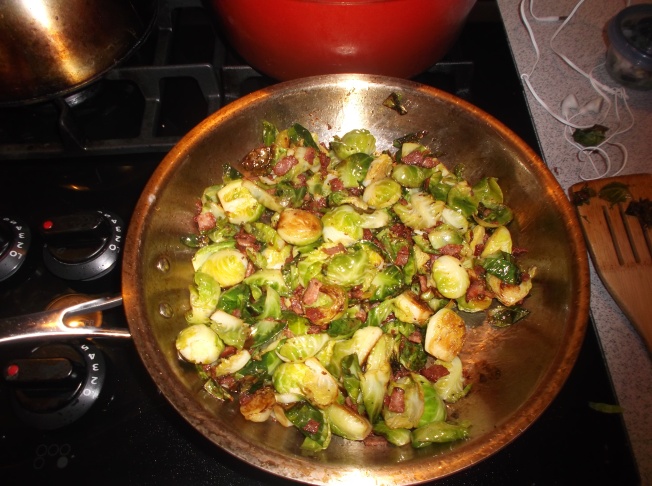 Bacon is added back in with some butter, mmmmm. Then off to the kimchi, hello Korean goodness! 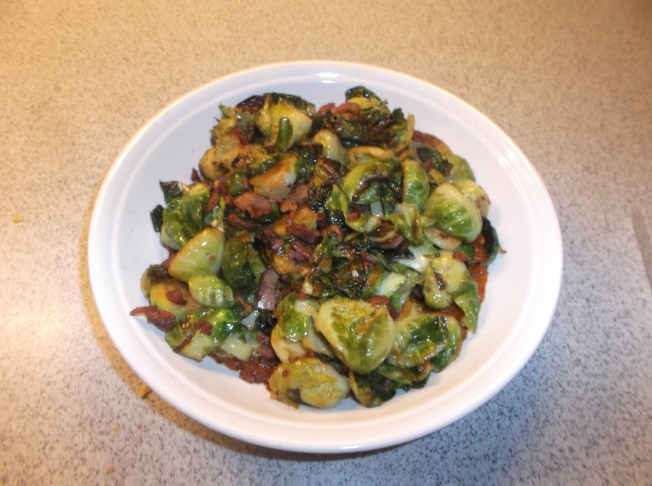 Serve aside this delicious slow-roasted salmon!