This was one of the few of my mix-and-match recipe concoctions that actually turned out well…woohoo! A few weeks back, my friend Molly and I made this yummy spaghetti squash stir fry and I decided to recreate it with some chicken. I don’t know about you, but I need to figure out how to mix it up with some marinades. This is usually pretty difficult considering by the time I decide I might want chicken for dinner, it’s still cooped up nestled between some ice cream and a pizza in the freezer.

Weeelll if you have one of those rare mornings where you can spare ten-fifteen minutes, this peanut sauce + a little extra soy sauce + the lime rind works as a great chicken marinade! Plus it’s super convenient because then you can use the rest of the sauce for some veggies and noodles.

Morning: Whip up the peanut sauce, using olive/veggie oil instead of grapeseed (don’t really have any grapeseed oil around my college kitchen…) We actually used a mix of sesame+olive I think

looks kinda weird, but i swear this is great! peanut butter, chili garlic, a whole lime and lots of other sweet+spicy goodness

Next: Coat some chicken tenders in a a few tablespoons of sauce + a few shakes of soy sauce in a plastic bag. I also added the lime rind to add flavor but who knows if that did anything 🙂 Place in the refrigerator for 3-12 hrs…I wish I had done this overnight!

Dinnertime: Heat up a pan and cook up your chicken 4-5 minutes per side. I’d also recommend tenderizing it a bit (pound out breasts/tenders until flattened a bit)

Take out the chicken and set aside. Add to the pan some chopped onions and peppers with a bit of oil 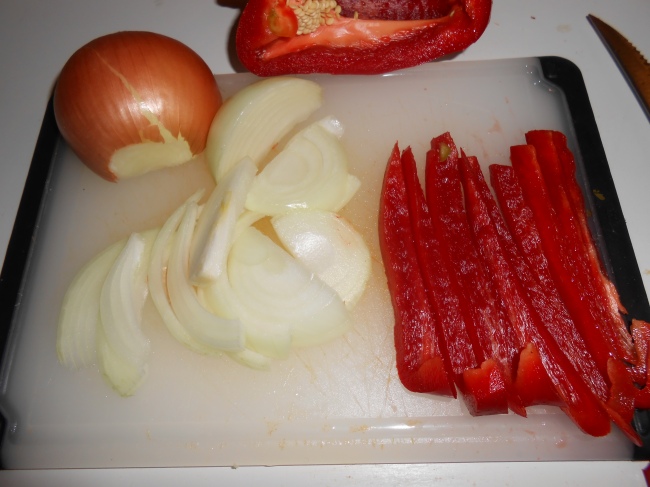 While these are cooking up, microwave those black noodles your mom sent you in a package (ok ya that’s just me, but ya know, noodles, rice whatever you want!)

Cook up your onions with peppers, garlic, frozen stir fry veggies (I used broccoli cuts), and baby carrots with some more peanut sauce

Mix it all up with some chopped cilantro and crushed peanuts on top!